skip to main | skip to sidebar

Moving to a new blog!

I'm ending my blog here at blogspot and moving over to Tumblr. If you would like to follow me my new blog is http://throughthevines.tumblr.com/

Thanks!
Posted by Portia at 2:26 PM No comments: Links to this post

I'm in desperate need of some comfort food. When stresses and money are flying in the air the best way to recover and relax is with your hubby and a big bowl of this: 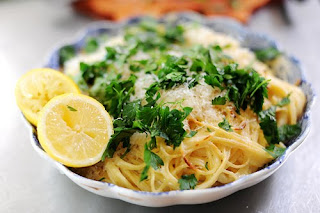 And I have no doubt that it is as good as it looks.
Posted by Portia at 1:38 PM 1 comment: Links to this post

Do you have a starter?

I just started my own sourdough starter! My dad had one that had been going on for over 15 years but died on the move to Utah. Sad day. His dad had one that was going on for over 150 years. He got it from a sheep herder up in the mountains in California I think. My dad wished he had gotten some of that stuff. And so do I.
So here's to my new pet! Wish it luck!
Posted by Portia at 4:09 PM No comments: Links to this post 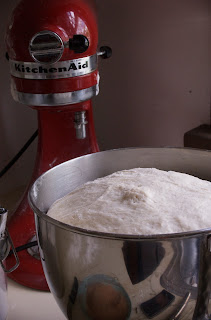 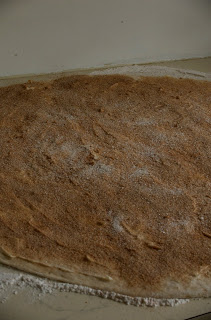 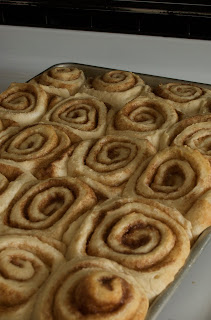 Recipe to come after I run some errands!
Posted by Portia at 7:08 PM No comments: Links to this post

You know what I love about summer? Food! For me at least, one of the most important things about memories is the good food that goes along with it.
For example, you can't go camping with out food!
You can't have a party with out food!
You can't watch movies, have bonfires, play games, go to the lake, go on roadtrips with out yummy food!
Speaking of roadtrips...we're (me and baby-roo) are taking a trip from N.California, to Oregon and then to Washington! Wanna know what the first thing I asked people was? Not what best route to take but if anyone had any suggestions on the best places to eat were. Anyways, I'm pretty excited.
Foods I love in the summer:
Melons. All and any. (ecs Watermelon)
BBQ brisket
Collslaw (my parents and grandparents make killer slaw)
popcorn balls
baked beans
Chili
chips
soda
popcicles
cobblers
seasonal pies
cider
cold sandwhiches
icee's
icecream
icecream cones..
ect ect ect
Anyways, one of the things I'm making tonight for dinner is Oklahoma's famous chili. YUM!
So excited! The special thing about Oklahoma Chili is what you put WITH the chili.
The reason I love ours so much is because we make it with pot roast and ground beef. THEN we put it with spaghetti. Top it off with spicy vinigar, crushed crackers and shredded cheese. Its the best thing in the whole world.
And the desert we are having for tonight is cheesecake! I love cheesecake! I have to admit I've never really made REAL Cheesecake before till tonght.
My dad use to make it all the time. And coming from a private chef, nothing ever tasted like it. Sadly enough, I couldn't get ahold of him so i resorted to another one. Its in the oven as we speak. And really I think its going to turn out pretty good. Its from one of my fav cook books by Dorie Greenspan
Its still in the oven so I'll post pictures soon...and put up the recipe too. 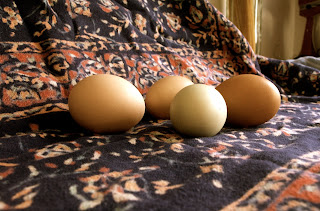 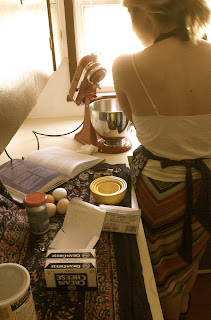 It came out! It came out great! It took longer in the oven than expected but it looks so yummy!
We can't eat it for 3 more hours..and by then it'll be almost 1am. So it looks like we won't be having any till tomorrow..sigh.


Tall and Creamy Cheesecake: A Basic
By Dorie Greenspan

For the Crust
1 3/4 C Graham Cracker Crumbs
3 TBS Sugar
Pinch of Salt
1/2 stick (4TBS) unsalted butter, melted
For the Cheesecake
2 pounds (4 8-ounce boxes) cream cheese, at room temp (crucial)
1 1/3 C Sugar
1/2 tsp Salt
2 tsp pure vanilla extract
4 large eggs, at room temperature
1 1/3 C Sour Cream or heave cream or a combination of the two
To make the crust: Butter a 9 inch springform pan-choose one that has sides that are 2 3/4 inches high-and wrap the bottom in a double layer or aluminum foil.
Stir the crumbs, sugar and salt together in a medium bowl. Pour over the melted butter and stir until all of the dry ingredients are uniformly moist. Turn the ingredients into the springform pan and use your fingers to pat an even layer of crumbs over the bottom of the pan and about halfway up the sides. Put the pan in the freezer while the oven preheats.
Center a rack in the oven, preheat the oven to 350 degrees and place in the springform pan on a baking sheet. Bake for 10 min. Set the crust aside to cool on a rack while you make the cheesecake. Reduce the oven temperature to 325.
To make the cheesecake: Put a kettle of water on to boil.
Working with a mixer (preferably with a paddle) in a large bowl, beat the cream cheese at medium speed until soft and creamy. About 4 min. With the mixer running add the sugar and salt and continue to beat for another 4 min or so, until the cream cheese is light. Beat in the vanilla. Add the eggs one by one, beating for a full min after each addition-you want a well aerated batter. Reduce the mixer speed to low and mix in the sour cream and/or heavy cream.
Put the foil wrapped springform pan in a roasting pan that is large enough to hold the pan with some space around it.
Give the batter a few stirs with a rubber spatula, jsut to make sure that there is nothing left unmixed at the bottom of the bowl. Scrap batter into the springform pan. Put the roasting pan in the oven and pour enough boiling water into it to come halfway up the sides of the springform pan.
Bake the cheesecake for 1 hour and 30 min, at which point the top should be browned (and perhaps cracked) and may have risen just a little about the rim of the pan. Turn off the oven and prop the oven door open with a wooden spoon. Allow the cheesecake to luxuriate in its water bath for another hour.
After 1 hour, carefully pull the setup out of the oven, life the springform pan out of the roaster-be careful, there may be some hot water in the aluminum foil-and remove the foil. Let the cheesecake come to room temperature on a cooling rack.
When the cake is cool, cover the top lightly and refrigerate for at least 4 hours; overnight is better.
At serving time, remove the sides of the springform pan-I use a hairdryer to do this-and set the cake on a serving platter.
**the only thing I had trouble with was removing the foil....any tips would be great!


Pictures of us eating coming tomorrow. I might even have a slice for breakfast!


Glorious Cheesecake...or so we hope.


I LEAP OUT OF BED! Throw open the fridge and there it sits


A giant cheesecake whispering my name to just have a taste.
I didn't hesitate.
I woke up Erik and told him it was time.


Okay okay I'll end the drama. But its all true. We split a piece for breakfast and even Erik who hates cheesecake said "This isn't Cheesecake! This is something different!" Then he smacked my hand away from the cake. So we're calling it yum yum cake instead. 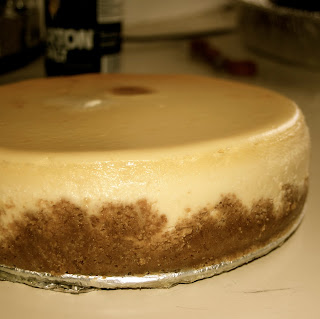 I did a wave of craziness on the crust as you can see.

Posted by Portia at 6:50 PM No comments: Links to this post 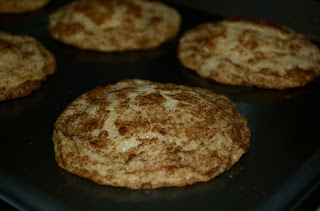 I have found the best way to eat a snickerdoodle is with a big glass of chocolate milk! 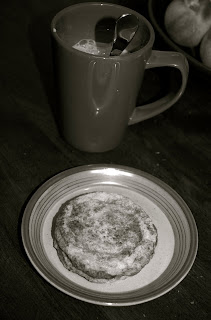 Makes three dozen 3 to 4-inch cookies. Your mileage will vary by the size scoop you use.
2 3/4 cups all-purpose flour
2 teaspoons cream of tartar
1 teaspoon baking soda
1/4 teaspoon salt
16 tablespoons (2 stick or 8 ounces) unsalted butter, at room temperature
1 3/4 cups sugar, plus more if needed
2 tablespoons ground cinnamon, plus more if needed
2 large eggs
Preheat the oven to 400°, with one rack in top third and one rack in bottom third of oven. Line baking sheets with silicone baking mats or parchment paper; set aside.
Sift together flour, cream of tartar, baking soda, and salt; set aside. In the bowl of an electric mixer fitted with a paddle attachment, combine butter and 1 1/2 cups sugar. Beat on medium speed until light and fluffy, about 2 minutes. Scrape down sides of bowl. Add eggs, and beat to combine. Add dry ingredients, and beat to combine. At this point, I chilled the dough for an hour (or you can overnight) before scooping it, because I otherwise found it too difficult to scoop into balls and roll but the original recipe doesn’t find this step neccessary.
Once dough has chilled, in a small bowl, combine remaining 1/4 cup sugar and the ground cinnamon. Use a small ice-cream scoop* to form balls of the dough, and roll in cinnamon sugar. Place about two inches apart on the prepared baking sheets. Bake until the cookies are set in center and begin to crack (they will not brown), about 10 minutes, rotating the baking sheets after five minutes. Transfer the sheets to a wire rack to cool about five minutes before transferring the cookies to the rack. In theory, they can be stored in an airtight container up to one week, but I say good luck wtih that.
* Martha recommends a size 30 (1 1/4 ounce) ice cream scoop but I used a size 40 (3/4 ounce) and they came out 3 to 4 inches across, or plenty huge.
Posted by Portia at 7:52 PM 2 comments: Links to this post 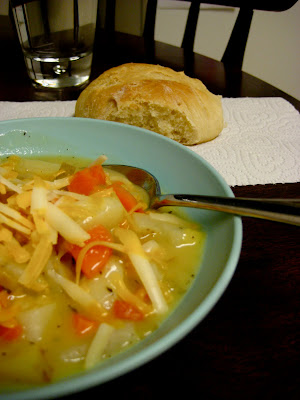 This is one of my favorite soup recipes. Its so versatile. You can add chicken or not. You can add onions or leeks or this or that and a rattle-dat-dat.
The traditional way of doing it is placing a big yummy buiscut right on top (or puff pastry buiscuts), but I was more in the mood for rustic rolls.
So for the recipe:
1 sheet puff pastry (9in squares), thawed but cold
1 egg, beaten with a little water
2tsp of poppy seeds
2 baking potatoes-pealed and cut into 1/2 inch cubes
salt
1 c frozen peas, thawed
3 tbs of extra virgin olive oil
1 1/2 lb chicken breasts (optional)
2 leeks-thinly sliced (or onions)
1 carrot, peeled and shredded (or chopped)
2 tbs of chopped thyme
2 tbs butter
2 tbs of flour
1/2 white wine
1 cup chicken broth (or veg. broth)
1/2 cup heavy cream
Grated peel and juice of 1 lemon
1. Preheat oven to 425. Roll our the puff pastry into a 12-in square. Set aside four 2 cup bowls; invert 1 bowl onto the pastry and cut out 4 rounds. place on a parchment-paper lined baking heet and brush with the egg. Sprinkle with the poppy seeds and bake until golden, 12 min. Let cool
2. Into a large saucepan, add the potatoes and enough water to cover. Bring to a boil, salt the water and cook until tender, 7 min. Add the peas and cook for 1 min; Drain.
3. In a skillet, heat 2tbs EVOO over medium heat. ADd the chicken, season with salt and pepper and cook for 7 min. Transfer to a plate. Add the remaining 1 tbs of EVOO to the skillet. Add the leeks and carrot; season with salt, pepper and the thyme. Cook for 3 min.
4. Scoot the leeks to the side and add the butter. Whisk in the flour then the wine and chicken broth. Stir in the chicken and cream and heat through. Stir in the lemon peel, lemon juice, potatoes and peas. Fill the bowls with the chicken mixture and top with the crust.
Posted by Portia at 7:37 PM No comments: Links to this post